In the evening of March 19th 2021 a volcanic eruption started in Fagradalsfjall, Iceland. Although the episode posed no threat to aviation (no ash was produced), significant amounts of volcanic gases were (and still are being) released. Such gases can cause respiratory problems, and if the concentrations are high enough, skin burns and asphyxiation. Thus it is highly important that the spread of volcanic gases can be predicted.

Work was immediately started on simulating the dispersion of gas on ARCHER2 via an emergency allocation of units. We used the Weather Research and Forecasting (WRF) model. WRF is a numerical weather prediction model written by the National Center for Atmospheric Research and other US agencies. NCAS have modified the WRF model to include the release of dense gases, such as SO2. Previous work by our group has shown that dense gases can settle in low-lying areas and this is important in regions with complex topography, such as Iceland.

The simulation covered all of Iceland at 1 km horizontal resolution and the model was initialised with meteorology from a global weather model. Reports were received from Iceland that the release rate of SO2 was approximately 20 kg/s and this was used in the model simulations.

An example dispersion simulation is shown below. Note the complex patterns of dispersion – this is why such a high-resolution model is needed. The sophistication of this model simulation demands a large number of processors – two nodes (using all 256 processors) were needed to produce a simulation that advanced far enough into the future to be useful. This allowed a speed-up of 12X – in other words, 1 hour of time on ARCHER2 would produce a 12 hour forecast. Our ARCHER2 simulations gave a 48 hour forecast, the model output was processed and plots produced, and the results uploaded to the internet.

The impact of this event is difficult to determine at present – it is still (as of 4th May 2021) ongoing. 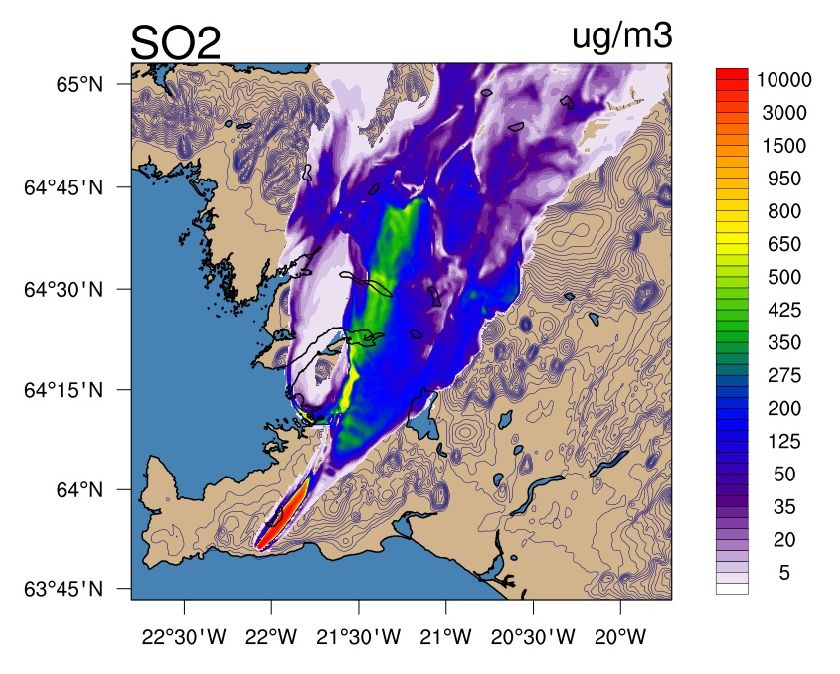 Forecast of SO2 dispersion for the Southern Peninsula of Iceland, 16th April 2021. The hazardous gas is shown colour-shaded and the solid contours show the height of the terrain at 50 m intervals. The wind direction is from the south-west.