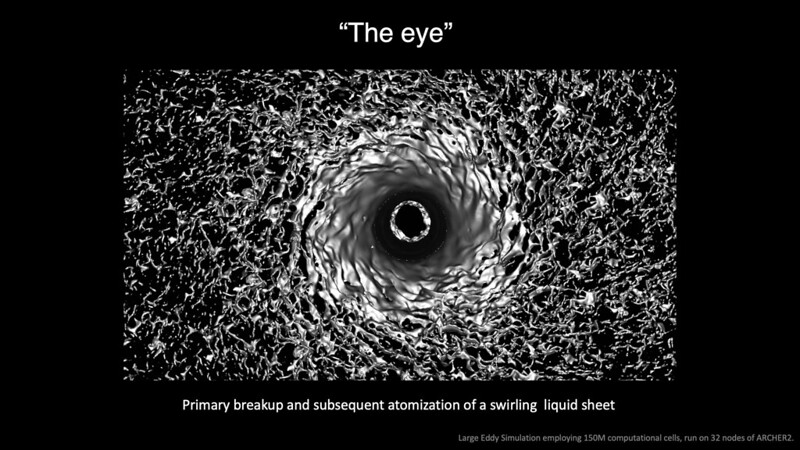 A view into the "air core" of a pressure swirl atomiser, showing formation of a thin liquid sheet, its primary breakup, and subsequent atomisation into small droplets. 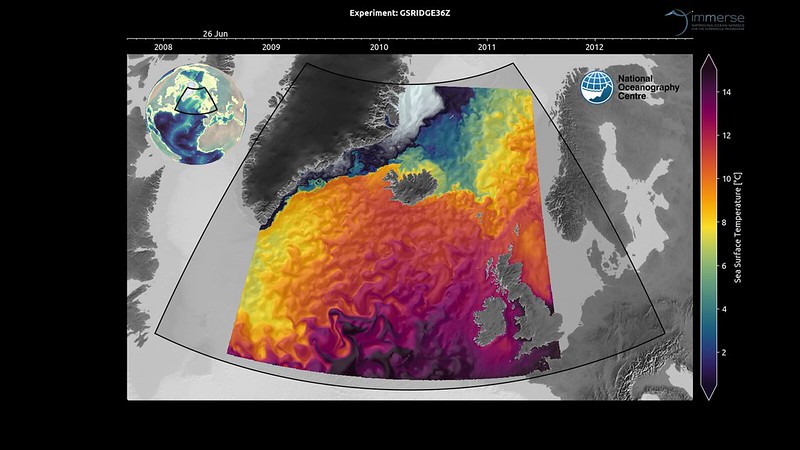 The video shows the evolution of sea surface temperature and ice concentration in an ocean simulation covering the Greenland-Scotland Ridge. It is one of the regional 1/36&degree simulations that are guiding the implementation of high-resolution zooms in a global 1/12&degree model. The ultimate goal is to improve the overflows of deep water masses. The optimal final configuration is expected to improve the performance of the global model for climate timescales (decadal and multi-decadal). The simulation was designed and performed by the National Oceanography Centre as part of the IMMERSE project. The ocean general circulation model NEMO was run on the UK National Supercomputing Service Archer2. 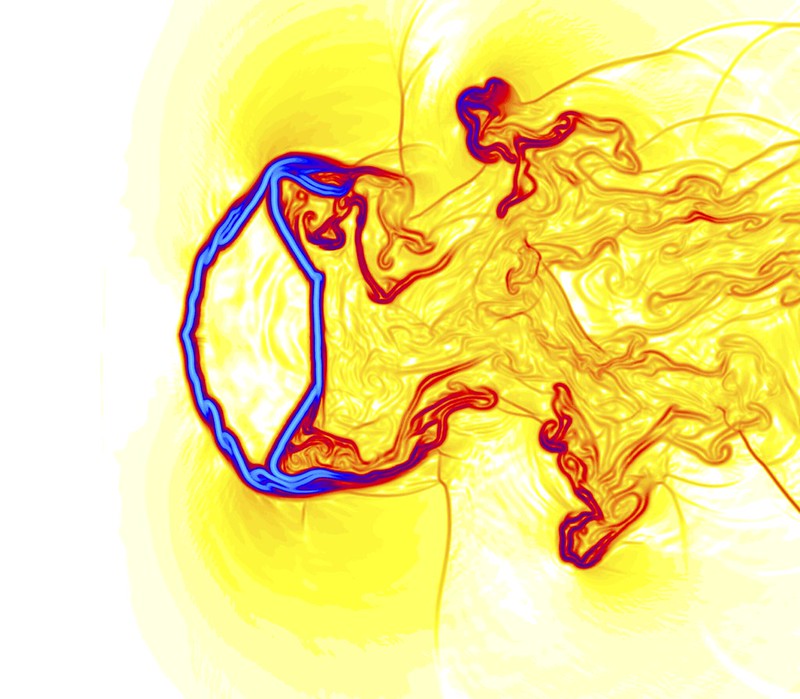 Interaction of a shock wave moving with Mach=2.4 and a gas-filled water bubble. These types of cavitation-bubbles can be found in several settings, ranging from our bloodstream to fuel droplets in hypersonic scramjet engines. Therefore, understanding the physical processes that occur during this interaction, can lead to more efficient targeted drug delivery, faster detection of neoplastic diseases through ultrasound imaging, and better protection from cavitation erosion and surface damage of hypersonic scramjet engines. The simulation was performed with the opensource freely available ucns3d software. 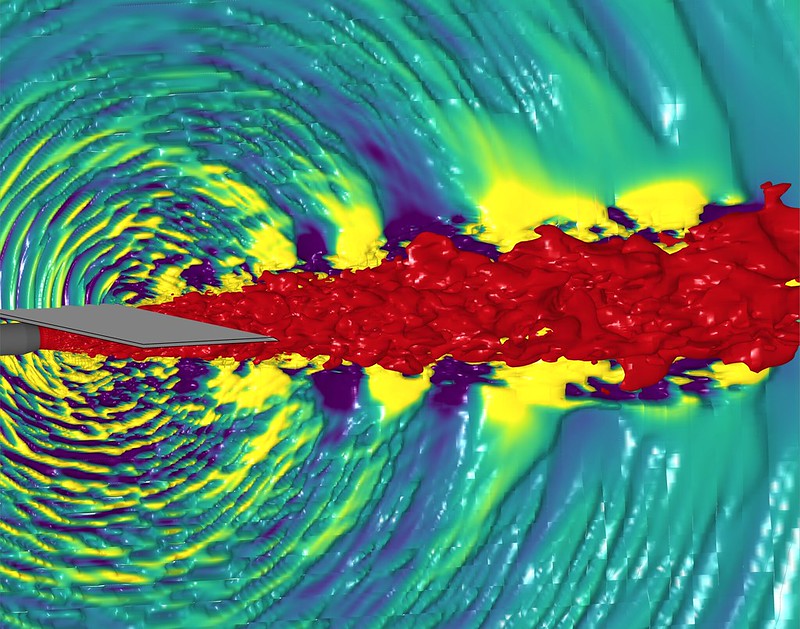 The image reveals the interactions of jet turbulence and acoustic waves when the former is subject to a thin plate - a scenario often known as "installed" jets. High-frequency tones (yellow) as well as low-frequencies (blue) can be seen in the 3D rendering of the contour in the background. Jet turbulence is highlighted in red iso-surfaces in the foreground.
The aim of the research (partially supported by ARCHER eCSE12-20 project) is to develop a fast interface for a high-order acoustic solver, to couple with finite volume Navier-Stokes equations codes that are widely used in the UK Turbulence, Applied Aerodynamics and ARCHER communities. Using a high-order acoustic solver significantly widens the range of the sound spectrum captured further afield, hence is potentially a highly reliable approach that can be used not only for exploring flow/acoustics physics but as a predictive design tool for noise reduction. 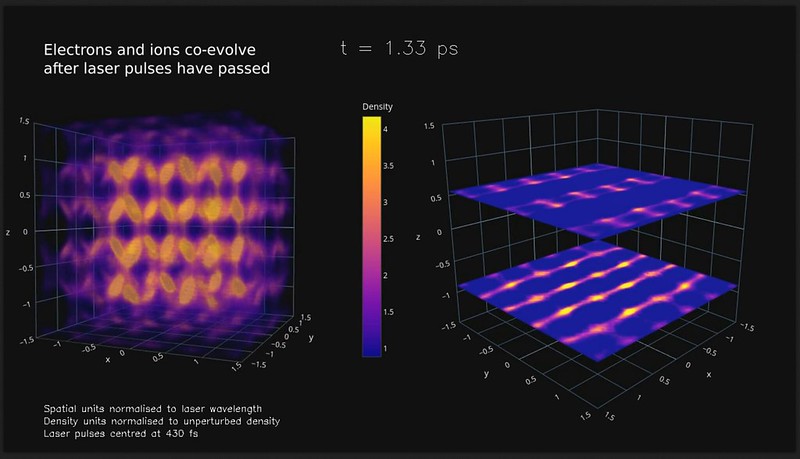 6. Evolution of a transient plasma structure

Ultrashort lasers have been major drivers of discovery and innovation for the past several decades, and continue to be to this day. By colliding high-power laser pulses in plasma, the particles can be arranged into a fascinating range of three-dimensional patterns that have useful properties. They can be used to manipulate high-power laser beams, and as compact light sources. This video shows how an initially homogeneous plasma can evolve into an intricate structure. The data was generated using the EPOCH code deployed on ARCHER2, which has enabled exquisitely detailed, high-resolution simulations. 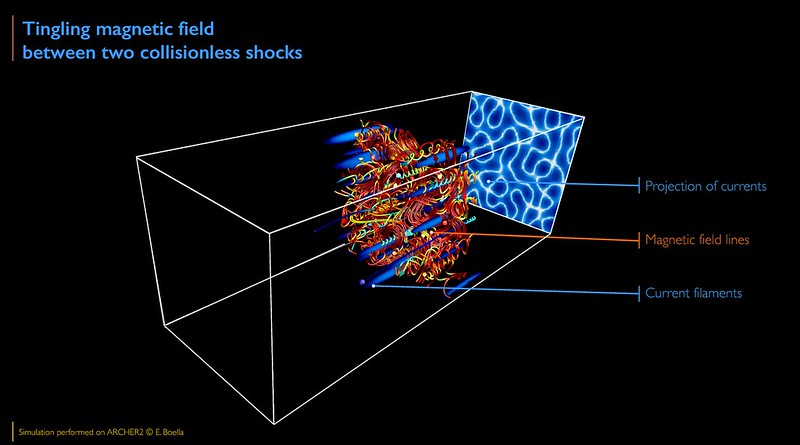 In ionised gases called plasmas, collisions among charged particles can be very rare, almost nonexistent. When this is the case, the formation of shock waves is mediated solely by the self-consistent plasma electromagnetic field. The image illustrates what happens when two shocks of this type interact. A strong magnetic field shows up in the interaction region (colour lines). The field bends the particles and causes them to agglomerate into current filaments (blue colour and projection). This in turn reinforces the field, which becomes stronger and stronger until equilibrium is reached. The simulation has been performed with the massively parallel code OSIRIS on ARCHER2. The work shed light on a physical process poorly understood, namely the collision between shock waves in collisionless plasmas. 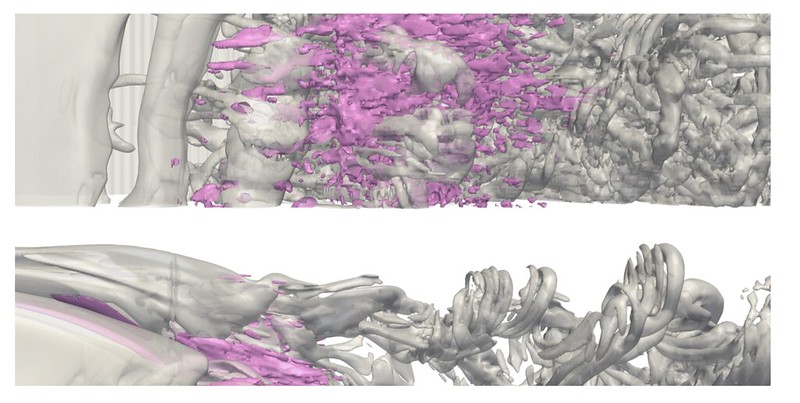 8. The emergence and coexistence of small-scale turbulence in an anisotropic and inhomogeneous flow

Enstrophy has a direct connection with the vortex stretching process that takes part during the energy cascade process and where dissipation finally occurs in turbulent flows. This quantity has been investigated mainly in Homogeneous Isotropic Turbulence flows. The two pictures represent the spatial topological evolution of the transport of fluctuating enstrophy by turbulent fluctuations (pink contour with a value of 650) immersed around the largest scales possible in the present anisotropic flow (represented by the Q-criterion value of 2) and enables to see exactly how this quantity emergence right after transition occurs and also its short-lived but intense interaction. This simulation has been achieved employing Archer2 and this has enabled us to achieve the required small-scale resolution needed for accuracy. The new knowledge about this quantity will enable us to improve turbulence modeling particularly in complicated geometry settings and thus accelerate industrial processes.